Dishonored 2 is set 15 years after the Lord Regent has been vanquished and the dreaded Rat Plague has passed into history. An otherworldly usurper has seized Empress Emily Kaldwin’s throne, leaving the fate of the Isles hanging in the balance. As Emily or Corvo, travel beyond the legendary streets of Dunwall to Karnaca, the once-dazzling coastal city that holds the keys to restoring Emily to power. Armed with the Mark of the Outsider and powerful new abilities, track down your enemies and take back what’s rightfully yours.

500 Coins to use in illegal black market shops

Imaginative World
From the grimy, rat-infested streets of Dunwall to the lush, exotic coasts of a decaying Karnaca, immerse yourself in stylized locales created by Arkane’s premiere art and narrative teams.

Challenge
Customize your gameplay options and difficulty settings for an even more tailored adventure. You can make the experience more challenging (or easier) by changing myriad parameters related to stealth, movement and combat.

The Void Engine
Dishonored 2 is beautifully brought to life with the new Void Engine, a leap forward in rendering technology, built from id Tech and highly-customized by Arkane Studios. Designed to support world-class art direction and take full advantage of the powerful hardware this generation has to offer, the Void Engine allows for significant advances to all game systems, including responsive stealth and combat Artificial Intelligence, lighting and graphical rendering, impressively dense urban environments, and story presentation. 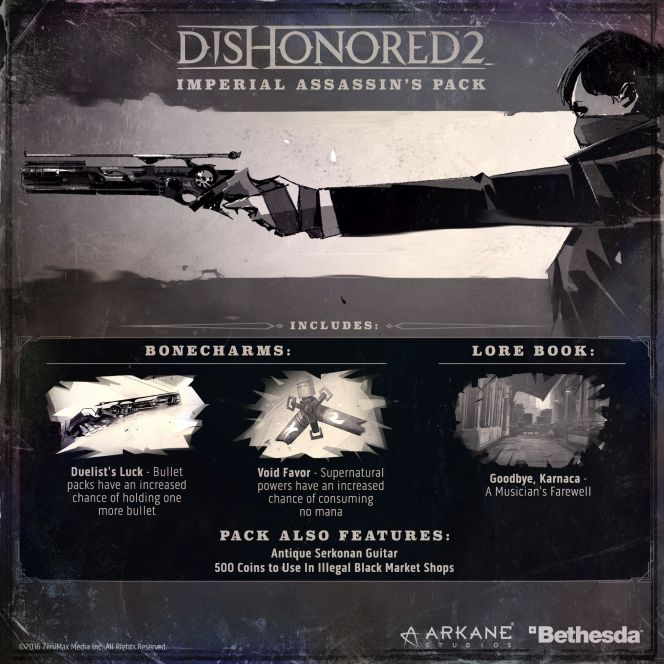